Foreign Investment: How to Make it Work for Developing Countries

Foreign Investment: How to Make it Work for Developing Countries

To many observers, multinational corporations seem to have considerable clout. Sophisticated global value chains criss-cross the planet and have an impact on numerous sectors of economic activity, the environment and labour markets. Consequently, governments and civil society have called on international business to make a more meaningful contribution to the advancement of sustainable development and the fight against climate change.

Some of these calls are motivated by concerns about business conduct, others by more practical considerations: governments have stated on record that they cannot finance and deliver on the Sustainable Development Goals (SDGs) without private sector involvement. Foreign direct investment (FDI) is an important source of capital for many economies, hence the question arises whether FDI is a viable channel for promoting the achievement of the SDGs and for mitigating climate change.

The realities on the ground are chastening, as we evidence in the 27th Global Trade Alert report. The decline in FDI outflows is alarming: once a hallmark of globalization, FDI has been struggling for quite some time, and is being further compounded by the ongoing pandemic. Even before the 42 per cent drop in FDI registered last year, sensibly benchmarked annual FDI inflows have been declining since the global financial crisis. Moreover, new greenfield investments in developing countries were hit particularly hard last year, plunging by 56 per cent year-on-year in the fourth quarter of 2020. As a result of the economic fallout from COVID-19, new FDI flows have retreated to levels not seen in 25 years.

The fact that FDI project approvals were put on hold last year is understandable. The fact that FDI inflows did not grow in line with the private sector’s overall capital expenditure even before the pandemic ought to be a cause for concern. If the contribution of FDI to sustainable development and the fight against climate change is dwindling, then any private sector contribution to these pressing global challenges must lie elsewhere. 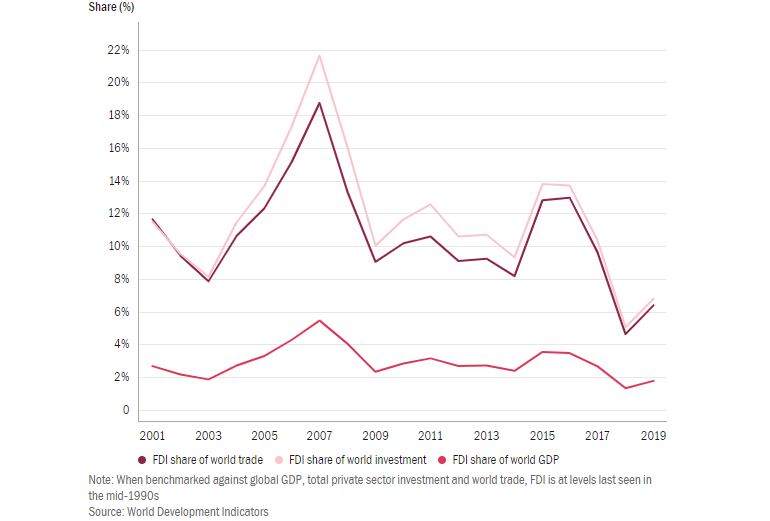 Does FDI in emerging markets still pay off?

Doubts about the viability of new FDI flows into developing countries are growing. Using data reported by UNCTAD (based on balance of payments sources) and the United States we find that three things.

First, globally, the average return on FDI has declined over the past decade. Mean FDI returns decreased more in developing countries than in higher income countries. Second, with the exception of the Middle East, U.S. multinationals have earned, at most, meagre additional returns from FDI in developing countries since 2015, when compared with investments in less risky European Union economies.

Third, returns on U.S. FDI in educational services are so low that it would take 40 years to recoup their outlays. The payback period for investments in health and telecom is even worse at over 90 years (Figure 2). Higher returns from investment were reported for the manufacturing sector, while returns from the oil and gas extraction and the mining sectors were very low. 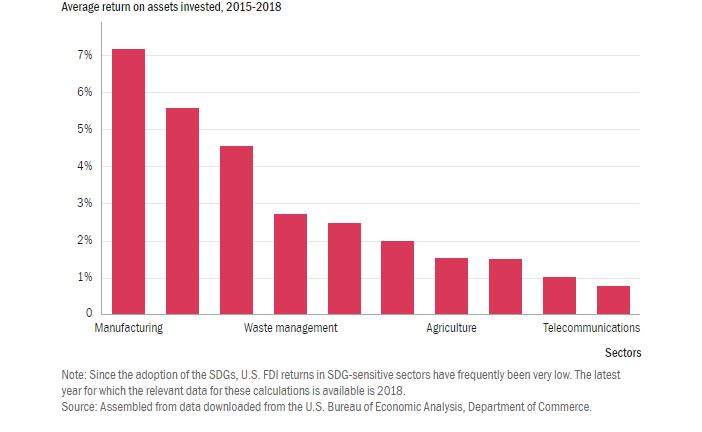 Falling returns on FDI are the canary in the coal mine – they call into question the commercial viability of setting up shop in developing countries and retaining operations there. Firms are not charities – in the absence of subsidies or other state-provided financial incentives, at the very least, FDI returns must exceed firms’ cost of capital. Over the past decade, however, FDI returns have been low by historical standards (partly on account of quantitative easing by central banks), but they are unlikely to be low enough to justify investment with decades-long payback periods.

To better visualize the effect of low financial returns on FDI, consider the following: bearing in mind that capital tends to depreciate by just under 4 per cent annually in developing countries (the median depreciation rate on capital for developing countries reported in the Penn World Tables is 3.9 per cent), fresh FDI inflows of at least USD 440 billion per year are needed just to maintain the current stock of FDI invested there. Whether international business is prepared to deploy such huge sums given the current business environment and policy mix is both an open and rarely asked question.

Discussions on the contribution of international business to pressing global challenges need to be reset. FDI cannot make a meaningful contribution to sustainable development and to the fight against climate change unless sufficient FDI can be mobilized in the first place. Deliberations on the quality of FDI and on business conduct are important, but the quantity of FDI matters, too.

Policymakers should revisit the business case for choosing FDI over other corporate projects or returning money to shareholders. Implementing the following three steps will improve the commercial prospects of FDI in development-sensitive sectors.

First, having determined why returns on FDI are so low in a given developing country or why such returns are declining, dialogue between the World Bank, regional development banks and the host government should identify which policies and corporate practices need to be changed and what type of technical support is required to effect such change. Second, governments in developing countries should target state-provided financial support for FDI at priority sectors where sustainable development benefits are likely to be greatest. This applies to financial incentives for both outward as well as for inward FDI. Third, governments should progressively ‘de-risk’ FDI by thoroughly reviewing and benchmarking existing regulatory policy and enforcement practices. Particular attention should be paid to the implementation of recently approved FDI screening policies.

With over USD 11 trillion invested in developing countries, both international business and governments have a huge stake in reviving FDI and the growth and prosperity it can bring. To date, too much of the onus has been on international business. Advocates of sustainable development, for example, are calling on the private sector to “align” itself with the global and societal transformations necessary for achieving the SDGs.

SDG advocates and policymakers must reflect and act on why returns of FDI in key sectors are so low and why they have only attracted a trickle of FDI inflows. Stronger corporate contributions to sustainable development should be complemented by policy reforms to restore the viability of FDI in developing countries – a proven mechanism for transferring management expertise, people, capital and technology.

The debate on what international business can realistically deliver needs to urgently be reset, especially if there is no reversal in the deteriorating policy treatment of FDI. We must rediscover the win-win mindset that propelled the contributions of FDI to societal development in the first place.

Professor of International Trade and Economic Development, University of St. Gallen, Switzerland and Founder of the St. Gallen Endowment for Prosperity Through Trade

CEO of the St. Gallen Endowment