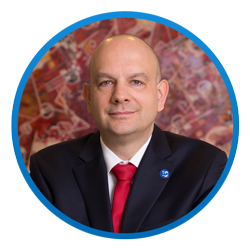 I am honored to be serving as the CEO of WAIPA. I look forward to taking this opportunity to appreciate WAIPA’s accomplishments thus far, and also to share with you my vision for WAIPA’s future. WAIPA, as we refer to it, is a Global reference point for Foreign Direct Investment. We have over 130 members from 170 countries that form WAIPA’s progressive membership. These members then form part of our Steering Committee from 13 regions. WAIPA believes in a regional focus when it comes to putting in place best practices to attract foreign investment into regions. This is because we believe that FDI attraction principles need to be combined with local knowledge to be most effective.

In 2016, according to UNCTAD, IPAs were collectively responsible for USD 1.85 trillion. Therefore, empowering IPAs to promote FDI is an important economic activity, in which FDI promotion is essential in helping to lift the global economy out of its current slump. In order to do so, WAIPA must dedicate itself to achieving ambitious endeavors that encourage FDI flows with the help of IPAs to form a coherent and collective strategy that involves different countries and regions around the world. We want to instill a philosophy of cooperation over competition. One such method can be to encourage countries to pursue a joint business proposal to large scale investors. Contemporary economic trends demand that countries operate as independent units according to their specializations and thus be better prepared to attract more FDI by pooling in resources.

In this regard, WAIPA has taken note of the shifting dynamics of global economics. There is a growing influence of emerging economies and WAIPA has acknowledged their resilience when faced with the financial crisis. Furthermore, emerging economies are asserting a greater role in directing and attracting FDI inflows. In light of these new global financial trends, WAIPA is placing extra emphasis on the FDI growth of IPAs associated with emerging economies. WAIPA particularly seeks to boost FDI in developing countries since they need investment of USD 2.5 trillion annually. WAIPA is exploring new avenues to examine how we can best support regional trade such that it becomes a sustained hub of economic activity that links to the wellbeing of the local people.

WAIPA is framing its objectives to match the UN established Sustainable Development Goals (SDGs) for 2030. In this regard, WAIPA is dedicated to achieving its economic activities in compliment with the SDG targets. These targets are focused towards the development of reliable and sustainable infrastructure, including regional and trans-border infrastructure. Furthermore, emphasis is placed on supporting technology development and innovation to ensure a policy of industrial diversification and value addition.

The global economy poses many challenges and uncertainties. As CEO of WAIPA, I firmly believe in order to work through these financial risks, consultation with all stake holders of WAIPA is essential.

I would like to thank WAIPA’s ever growing members for their positive contributions made and I hope this synergy among members of the steering committee, multiple IPAs, academia, trans-national cooperations, national governments and regional financial organizations will translate into attaining better opportunities for WAIPA and in the process ensure its growth in connecting economic centers of trade from across the planet.

WAIPA aims to bring more value to all members and to invite new members to benefit from the services of WAIPA. We share member success stories on our website; we hold joint events and offer cutting edge technical trainings among a list of growing value for regions and governments. Ultimately, we are the real bridge between businesses and governments.