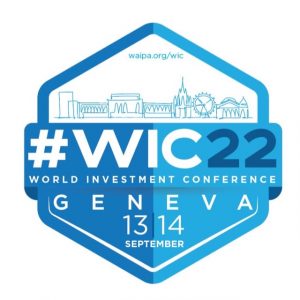 The 26th chapter of World Investment Conference (WIC) took place during 13th to 14th September 2022 in Geneva, Switzerland. This year’s event was held under India’s presidency on the overarching theme of “Investment Promotion Agencies (IPAs) Shaping the Future of Foreign Direct Investments (FDI)”. Organised under the presidency of Invest India, this year conference was attended in person by over 350 representatives from 104 countries representing 7.25 billion population. The event was live streamed in over 100 member countries.

Hosted since 1995, the WIC is WAIPA’s annual flagship event and a key forum where IPAs, multilaterals and the private sector convene to address current economic and social issues that may affect global investment flows and other strategic and policy considerations. It is one of the largest gatherings of IPAs from least developed and developing countries.

India is the elected President of WAIPA for calendar years 2022 and 2023. Delivering the keynote address, WAIPA President, Mr. Deepak Bagla said that “Its about transparency, equity and access to opportunity. And this is central to what WAIPA wants to do, and it is the most important pillar for us as we move across to the next 36-48 months.” He highlighted that “Digitisation is a solution which does not only involve scale but brings you pace and speed. It is an imperative. And this is what we want to work together on, as a family.”

Keynote addresses were delivered by H.E. Anurag Jain, Secretary, DPIIT, Government of India who pointed towards knowledge, innovation and sustainability as the pillars of global growth. He said “Knowledge and innovation give rise to new and emergent technologies and provide solutions to the most complex problems. This foster growth, but growth alone isn’t enough, it must be sustainable. Growth that doesn’t only enrich our present but ensures the protection of our future.”

Mr. Patrik Wermelinger, Head of Investment Promotion, Switzerland Global Enterprise & Vice President, WAIPA, highlighted that WAIPA brings together the top national IPAs. “We congratulate WAIPA on this valuable platform that makes it possible for all of us to share our ideas, learnings with the aim to help everyone become more successful for your individual country. This is very much in aim with the spirit of Switzerland which is committed to advanced international cooperation and dialogue among nations.”

Mr Ismail Ersahin, Executive Director, CEO (a.i.), WAIPA in his vote of thanks mentioned that “IPAs have been called as a bridge between governments and investors for years, but I find this metaphor a bit unfair to them. They are no longer passive institutions to walk through, and I would rather call them as the engines of FDI with their proactive approach, dedication, hard work their passion and their vision.”

Established in 1995 under the aegis of the United Nations Conference on Trade and Development (UNCTAD), WAIPA is the primary nodal agency for investment promotion and facilitation bodies, representing around 105 countries. Many of its member Investment Promotion Agencies (IPAs) report directly to the Heads of States of their respective countries. WAIPA, headquartered in Geneva, Switzerland, actively works to promote the role of IPAs, in enhancing economic development and foreign direct investment around the world.